Did We Order This Meal "To Go"?

Lloyd Olsen went out to his chicken yard to pick out his next meal. He snatched up one of the chickens and picked up his axe. Lloyd loved to eat chicken. But he especially loved the neck of the chicken. Who doesn't? (Insert gagging gesture here).

If you've ever witnessed a chicken-head chopping ceremony, you know what happened next. If you haven't, you need to put that on your bucket* list.

That chicken lost his head but the rest of him worked just fine. As with most chickens who lose their head, this chicken took off running all over the yard. Unlike most headless chickens, this chicken didn't fall over and die. It lived!

Lloyd kept watching and waiting for his dinner-to-go to stop going. When the chicken finally stopped, it just stood there and acted like a normal chicken. As normal as a headless chicken can act. It walked around, scratched the ground, and may have even tried to peck for food -- but how would you know? 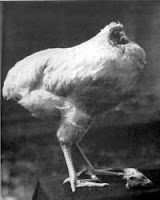 Lloyd named the chicken, Mike. I don't know why. Ichabod sounds more appropriate. But Lloyd took Mike under his wing* and cared for the cranial impaired creature.

Mike went through the motions of pecking for food, but couldn't get anything. He tried to crow, but only made rasping gurgles. Lloyd fed Mike with an eyedropper,** expecting the beakless, brainless bird to die at any time.

A week later, Lloyd took his headless chicken to some scientists at the University of Utah. After scratching* their heads* for several hours, the scientists surmised that Mike had enough brain stem left to live without his head because Lloyd chopped so high on the neck.

This chopped-top chicken made it into Life magazine. I don't think it made the cover because they never could get a decent head shot.* But the chicken was also entered into the Guinness Book of World Records, surpassing all other headless chicken records. Though he had neither, Mike stood head and shoulders* above all the other chickens.

Lloyd took Mike on tour across the country. People from all over marvelled at Mike. They'd never seen anything like it. Mike finally met his demise in an Arizona motel 18 months after he lost his head. Apparently, he choked to death on a kernel of corn. Lloyd tried to save him, but it was the 1940's and Lloyd had no knowledge of the heimlich maneuver. He only knew mouth to mouth...(pausing for effect).

As a pastor, I don't find Mike the Headless Chicken to be such an unusual phenomenon. I see Christians and churches on a daily basis who have learned to survive without the Head.

What do I mean? The Church is made up of individual Christians and is called "the body of Christ" throughout the Bible. Jesus Christ is clearly "the Head of the body" (Ephesians 4:15). Yet, I've seen Christians and churches who've gone through the motions of daily life for years without the Head.

Followers of Jesus Christ are commanded to "grow up into Him who is the Head, that is, Christ...from whom the whole body, joined and held together by every supporting ligament, grows and builds itself up in love, as each part does its work" (Ephesians 4:15-16, NIV).

Mike didn't choose separation from his head and would've given his right leg* to Colonel Sanders to get his head back. That's the difference.

When Christians and churches are Headless, we are the ones who separate ourselves from the Head. And although we can resume following Christ's direction and guidance at any time -- we can literally rejoin the body to the Head through repentance and surrender -- too many times we prefer to remain Headless. Pecking without a head gains no nourishment for the chicken or the church.

We move, but without direction. We are worse than the blind who follow the blind. Without the Head, we might as well jump into the pan and light the stove...we're cooked!
You can't get ahead without the Head,
Perry Crisp
*This is where I would have said, "pardon the pun," but there were just too many to keep interrupting midsentence.

**Feeding a headless, eyeless bird with an eyedropper just seemed......eye-ronic to me.
Posted by Perry Crisp at 7:59 AM

Email ThisBlogThis!Share to TwitterShare to FacebookShare to Pinterest
Labels: body of Christ, chicken, Christ as the Head, Ephesians 4, headless